The day of the media fame.

4th of May was quite a big day.

Yes, I was all over the local media, but the most important part – on that day I was really stepping out of my comfort zone.

I will try to describe the day step by step, although some parts have gone missing from my brain due to emotional state.

My morning coffee was the wake up call and then the nerves kicked in.The day before I submitted a press release to Hull Daily Mail and had an interview with a news reporter, but never got a confirmation, so was not sure if I got the article in.
You can read all about it here:
WEEKLY REFLECTION #22

No access to paper if honest was not a problem, because that was one less thing to worry about.

I received a text message from John Gilbert saying that he has seen me in the paper, article is amazing and looks good and that the BBC Radio Humberside Breakfast Show is already talking about my appearance on the Burnsy Show and debating on Funeral Photography. WHAT A SPOILER!!!!

Tuned in the BBC Radio Humbesride to see what is going on and actually heard them talking about me.

Left the house, need to grab a coffee, get a paper and be early.

The article was looking good, I was chuffed and proud of myself. Also the information was genuine and well written, so I was kind of looking forward to the radio show.

Went into BBC and was told to relax and wait, as I was not on until 11 am. So I went back to the park and started to point out the main discussion points.

I was trying to point out the main benefits of having a photographer at the funeral, just because a lot of people ask “what is the point?”

I am invited to sit next to the studio, near producers.

By this point I kind of wanted to get on with it and felt quite calm.

But then somebody from BBC Look North approached me and seemed quite surprised that I was there…In short – Look North have heard about me and wanted to contact me and do a news article on my subject. I explained that the Hull Daily Mail and Burnsy show is planned ahead and hopefully will give me more chances of getting access to a funeral.
He asked if we could do the filming after the show..

Thank you for pressing the “nerve” button just seconds before I have to get on the live radio.

I was in the studio,  opposite David Burns. I had a really good feeling about the next following 10 minutes, I had a quick look around, adjusted the microphones and was ready to go.

I won’t go into single details about the show and what we talked about, because we clearly talked about the Funeral Photography, Final Major Project, Latvian heritage and cultural differences. The most memorable moment was when the first question David Burns asked me was “so have you photographed dead body?” Well, yes, but I was not to keen to open my introduction by saying that I have been into a morgue and photographed dead bodies..

The radio show was quick, pleasant and really good experience. Would love to do this more often. David Burns really is a lovely radio presenter, it was my pleasure to be on his show. Also he invited me to come back when my project has taken some progress. Nice.

Here is the link where you can listen the show. It will expire and the link will remain as a proof that I was on the radio.

Look North reporter asked me to drag out my family photographs for stills. It was quite unexpected – this sudden interest and effort from other people to find out more.
So by then I was really going for it, enjoyed every second the experience.
He filmed for 10 minutes, me going through the photographs until the proper filming person arrives. 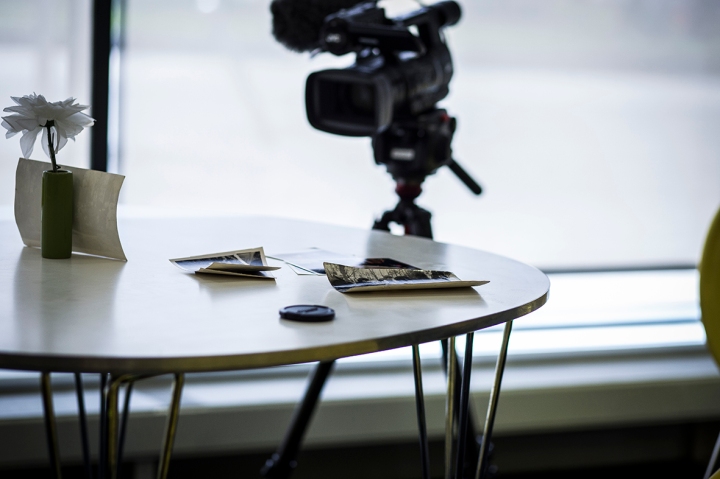 It was interesting to see news in making.

The proper filming person arrived and as he was preparing his kit, me and the news reporter had a conversation about the Funeral Photography, death and life. He said that he might help me out to get some funeral directors involved and I wished him the best luck, as I have experienced myself – they are not interested.

There was also a good phrase going about between us three – Not everyone gets married, but everyone dies – means that I  have found an area where a potential job is guaranteed. Sounds cruel, but is actually so true. So if I can get this project going and people start to see this as a valuable photography genre, I could definitely set up a business, based on the demand.

Filming started and to have some “fill the gaps” footage I had to pretend to be photographing ducks in Queens Gardens and walk about with a wondering look.

Here are the f**ing famous ducks.

I was a bit nervous about the interview as it gets filmed and I was not sure if I will be up for the job.

Once again, I really tried to explain reasons behind the project and the initial ideas and slowly moved into the current project ideas and progress, talking about what I would love to achieve at the funerals and prove people wrong.

It was so interesting to part of this crazy day, but the day did not get any easier. I had to answer a few phone calls from people congratulating me and “well done” messages. Also I happened to have a photo-visit later on the day for my Final Major Project.

Unfortunately due to WordPress restrictions, I can’t upload the Look North footage, but here is a link that proves my presence on TV:

I got in and I was so happy, relieved and proud that I have come out in public with my idea. It was official – I can make this project work, hopefully the interest will be there and people will give me a chance.

As I opened my email there was an email from Leeds based News Agency and they asked if I could give them a ring regards to the Hull Daily Mail article about Funeral Photography.

I was asked a permission to publish the article in other news sites and send few more photographs.

I know it was not a big deal – but that extended the positive experience.

Here is one of the links:

For the rest of the day I was receiving positive messages from many different people. Few of my friends said that at first the title and the topic seemed ridiculous, but when I explained and added my passion and “trademark” they changed their minds.
And that is the main thing – if, by talking about the taboo topics openly, I can change peoples minds that is half job done. I think that the hardest part of getting access to the funerals will be the convincing part. Once I get the photographs and show them to people, they will start to understand why I believe in this.

So now – hoping to get hundreds of phone calls, emails and messages asking to be part of someones End Of Life celebration – Funeral.