I ended this week with an important meeting with someone who are making Final Major Project feel realistic and doable. John from eskimosoup has been my friend for a while, I met him through volunteering and taking part with comedy related events and we have developed a professional and friendly relationship, every time having a productive brainstorming about life, projects and professional aspects of business.

Before I started my Final Major project, I approached John to see if he could help me find interesting people from Hull, communities that are doing great and celebrate Hull and it’s people. When my subject change to funeral photography, he was still interested to help me.

The meeting was regards explaining in depth my ideas and see if he could give me an insight from his business-minded aspect.

There was couple of significant ideas that [until this day] have created a big impact on how I see my Final Major project developing and extending outside course.

Whilst I was trying to get the words right when explaining my bizarre ideas around crashing funerals uninvited and photographing mourners,also photographing dead or dying people and exploring the cultural differences, John asked me some important questions that I need to seek answers for.

John suggested me to have a debate with members of public through Humberside Radio talk show – David Burns Show.

My obvious answer to this suggestion was “no”, although the idea of having a debate with radio listeners who could really give me an insight of what an average citizen thinks of this idea, is a genius idea…..

BEFORE I DIE WALL  was another new thing I was not aware of.
John told me about the idea and I was very much interested to explore the project and see if I can make something like that happen in Hull as part of my Final Major project.

“BEFORE I DIE” wall continues the debate about the life and death.
Can we all live like it is the last day of our lives? Is that really possible if humans in general have certain characteristics [can include self-pity, laziness, self-torture and fast pace living], plus every single person have got commitments and obligations….can we live the way that makes us proud human beings….?

“BEFORE I DIE” wall is an interesting way how to say what is on your mind, stop and think for a second.

There was also few suggestions to see terminally ill people and elderly people and see what they have to say about life, death and health.

The same day [just as we are going through my diary] I went to see Princess Quay or Realm management about external exhibiting space for the Final Major Exhibition.

We discussed the available spaces and Sarah [Realm management] was super-lovely and suggested downstairs space, opposite POP and HIP Galleries and have an open-to-public exhibition [40×20 ft]

They offered a help with promoting the exhibition and that was a great addition to the kind offer.

Before the exhibition I need to send over a liability insurance and go through health and safety regulations, before signing an event license.

We discussed project progression and I introduced Andy with new ideas, I’ve had in the past few weeks and I also showed the recent momento mori photographs. 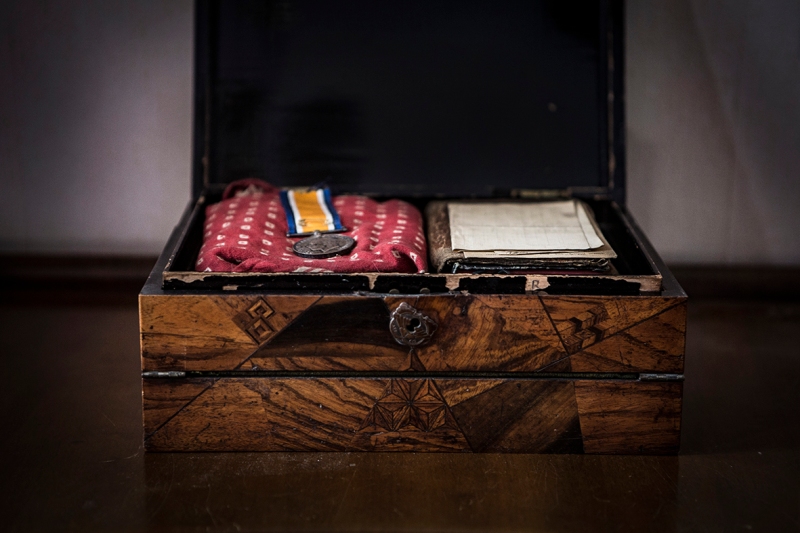 This particular image seemed to be most suitable for adding text and later on that week I contacted Alison to ask for specific details about her great-granddad and the writing box.

The idea of photographing things that people are leaving behind after their death is interesting to me and explores another aspect of life and death. We discussed if people are leaving these things behind for the next generation on purpose or is it just something that they are part of and makes up their past…?

It is also interesting to point out that I have a difficulty to see if the photographs are sending the message across to the viewer, as I assume that the image is a reflection f knowledge about someone’s past and life…

Is my target audience the family and friends of the loved one, or is it wide range of viewers from  different backgrounds, age groups and cultural backgrounds…..???

Looking back at the experience of photographing Alison’s momento mori, I go back to the question if I try to make everything look visually pleasing or I arrange everything according to its importance and according to timeline?

All these questions above might have been in my head previously, but once I have discussed that with someone who is following my project and progress, the key elements and questions suddenly clarify…

As I knew that the tutorial is a chance to get feedback and improve project content and flow, I felt the urge to mention the potential radio show visit…and as I suspected Andy thought that it is a brilliant idea and an amazing chance to see if people are ready to talk about death and funerals…

Andy suggested to have a good preparation for the show, create a story and focus on the subjects such as funerals, wakes, cultural differences between UK and Latvia and see if there are any volunteers for my trial funerals…
As this is a controversial subject to some people, I might get a true reflection of how ready people are to discuss this on public radio talk show….also I might get some odd angry people, that will be 100% against my project, ideas and even the cultural existence.
As I have been quite interested in project aspect about momento mori and other related subject, Andy’s suggestion to contact Hull Council and letting agencies regards to photograph the property straight after someone’s moved out and record the “leftovers” of a life, seemed like an intriguing idea.
Something for me to look at once the main part of the Final Major and funerals and death/life been explored enough.

“BEFORE I DIE” wall got a good feedback and again -seems like anything I recently find or come across extends the original idea to photograph funerals.

As my project is far from involving communities and people to take part and make a difference [original Final Major Project], “BEFORE I DIE” wall is a little bit closer to than and could potentially make my project more acceptable to the public.

Philip Toledano and his project “Days with father” adds to my research.
Mr Toledano

After she died, I realized how much she’d been shielding me from my father’s mental state. He didn’t have alzheimers, but he had no short-term memory, and was often lost.

I took him to the funeral, but when we got home, he’d keep asking me every 15 minutes where my mother was. I had to explain over and over again, that she had died.

This was shocking news to him.

Why had no-one told him?
Why hadn’t I taken him to the funeral?
Why hadn’t he visited her in the hospital?

He had no memory of these events.

After a while, I realized I couldn’t keep telling him that his wife had died. He didn’t remember, and it was killing both of us, to constantly re-live her death.

I decided to tell him she’d gone to Paris, to take care of her brother, who was sick.

‘Days with my father’ is a journal. 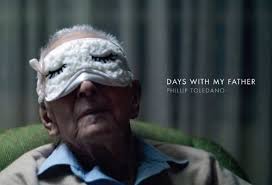 There is another blogger who writes about Mr. Toledano
Days with my father WordPress Steph McDonnell

I have looked at the photo book and I am fascinated about the gruesomeness and the amount of honesty within the photographs and text.

I think if I had more time [or I started the project earlier] I could potentially find someone that I can build a relationship with and go through similar stages using photography…only if I had time.
This could link to my idea contact Dove House Hospice or Cancer Unit in Castle Hill Hospital, or Palative care Unit….

Conclusion:
Past two weeks have been really intense, there has been a lot of new ideas, new contacts and links…new suggestions. The project is growing with every day and it is making me happy and panicky at the same time.

This entry was posted in Uncategorized. Bookmark the permalink.