Before I start introducing the festival and go into finer detail, I have to say that this post had to be written now. Because if I would let this soak into my system for a few days, I would lose the ability to be honest about it.

As some of us might have heard, October 2015 is the month for Hull International Photography Festival [see links below] and as I am a photographer that likes to get involved and learn, there was no question of not attending some of the events. So this Sunday I decided to exchange church visit for a day to myself with photography.

The festival has been put together by The Creative and Cultural Company and other companies, run by amazing Alan Raw and his team of volunteers [Sophie, John and his wife and others] and has been so big that even The Guardian has published a story on the festival [see links below].
As small as it sounded at first, it has gathered great worldwide photographers and other creative and talented photographers/practitioners around the UK. All venues in Princess Quay have been prepared and painted, work hanged by team of volunteers and turned into stunning gallery spaces. Festival also extends to other venues around Hull, such as St. Marry’s Church, Kardomah and Central Library.

All info is available on these websites:

http://www.theguardian.com/artanddesign/gallery/2015/oct/03/hull-international-photography-festival-in-pictures – The article in The Guardian

The reason for me posting this is that I visited three events today and I have learned so much about life/work/photography and most importantly about my self.

First was Dev Tank seminar. Photographers like Brian Griffin, Frieke Jenssens, Dave Kai-Piper, Peter Dench and Matthew Finn joined in discussion about photography as medium and art form. Graeme Oxby, who is exhibiting next door to HIP Gallery was leading the conversation and made sure everyone had a chance to speak up.

I have to say that the seminar was the highlight of the day. Discussions went from photography and education to . Brian Griffin compared freelance photography to survival game in the industry, that made me slightly worried, taking in account that he has exhibited worldwide and worked for a lot of “big guns”.
Matthew Finn discussed his strong opinion about not selling yourself and refusing to use digital photo-making, instead choosing to stick to the film, process and give his knowledge to the new generation of photographers. He raised question about education and how these days students are lacking the”love” for photography. At this point I started to disagree to the general opinion, because I reflect on my own experience as a student and I feel like in which ever palace you study at – it is up to you what you take out of the course anyway.
Dave Kai-Piper was interestingly talking about how quickly technology develops and we can never get ahead of the “newest” inventions, but that digital cameras these days are nothing more than digital copies of film cameras and that we are still waiting for a real digital era camera to arrive. Even though he admitted that he is in the early days of his career, he was still on point saying that adapting and re-invent is tiring, but necessary in the 21st Century.

I was able to relate to Frieke Janssens point about having the thin line between being yourself as an artist and get the assignments, meaning that she had to carefully select which personal work of hers will sell her skills to the potential clients. Obviously I’m not close to that point in my career at all, but she revealed that this fear can be in you as an artist regardless of how successful you are.

Some good practical advises came from Peter Dench and Brian Griffin saying that you have to be a brand first, than you knock on doors of magazines, communities, companies and everything that could possibly give you an assignment, because the money is always there, you just have to work hard to get those doors opened for you. As one wise man once told me that a good photographer is a photographer that continuously photographs – good, bad, amazing and boring. And today that was said plenty so I’m guessing that there is some truth abut it :]

I could talk more and have an essay here, but I need to get to the best part of the seminar.

Peter Dench has been a photographer that I’ve heard of, prepared a little bit before the festival, looking up his work and he reminded me so much of Martin Parr [like a complimentary gift when you buy something] in the best possible way, that I fell in love with his work there and then. Later on in the book signing he told me that, yes, his been called the cheap version of M. Parr, his drunk younger brother ect., but actually the only similarity is the approach to “all English”. Just as M. Parr, he takes the ordinary and makes it extraordinary, travels abroad to capture the culture and behaviour of British people.
Anyway, after talking to him, I decided to bring up the dissertation and if he could help me with information and resources about M. Parr and himself as he would be the great practitioner to include in my dissertation. After a successful “yes” I decided to reward my self with his book that preciously has been placed on the top of my favorite fire place, signed of course. 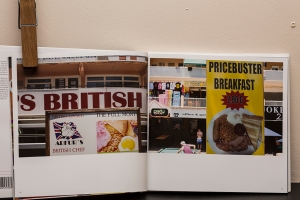 The next exciting story was about John Bulmer and his lecture at the Central Library. First thing – whilst on my way to the gallery, he approached me to travel to the same location, and only half way in the Princess Quay I realized that I am just casually walking and talking with the pioneer of British photojournalism in Britain and a BAFTA winning film maker. At that point I was very happy of how this journey is going and I made a promise to him that I will visit his lecture later on in the day.

His work is stunning that even on the projecting screen images looked like fine prints in the posh gallery. He took every listener into his own journey, sharing his best work and best stories. The way he expresses himself as a professional is amazing, sharing vital secrets of lenses he loves to work with, how he uses the Decisive Moment and how he sees the world.

The third event was case study from Nigel Tooby FRPS FRSA, He talked about extra dimensions in fine-art photography and his own work.

He was professionally prepared with two screens, presentation, but came a cross as a salesman of his work. He was there to sell his work and approach, regardless of what the audience wants to hear – I might be going wrong, but I left the presentation with this idea stuck in my head. He showed an interesting perspectives how to approach photography and exhibiting, also introducing obstacles that artists might cross when exhibiting with more than 2D work. I liked some of his work and some seemed extremely well staged and not suitable for the subject matter – for example his work with charity Simon on the Streets. A lot of his compositions, and what seems to be a documentary looked like arranged still life that had meaning added. I was left wondering…, but at the same time I was impressed with the way he uses 4D means of expression. You have to look at the work yourselves to agree or disagree with me [see the link below]. He’s work was challenging to me to understand, but I must say that he was comfortable with what he is doing and that can be convincing at times.

Again I will celebrate people that made this festival happen, thank you.
Hopefully you will see me volunteering in the galleries next week and I hope there will be a lot more attendance to other activities, it is a shame to miss out.
Next thing for me  – Saturday 10th of October – Pinhole Camera Workshop – see you all there.